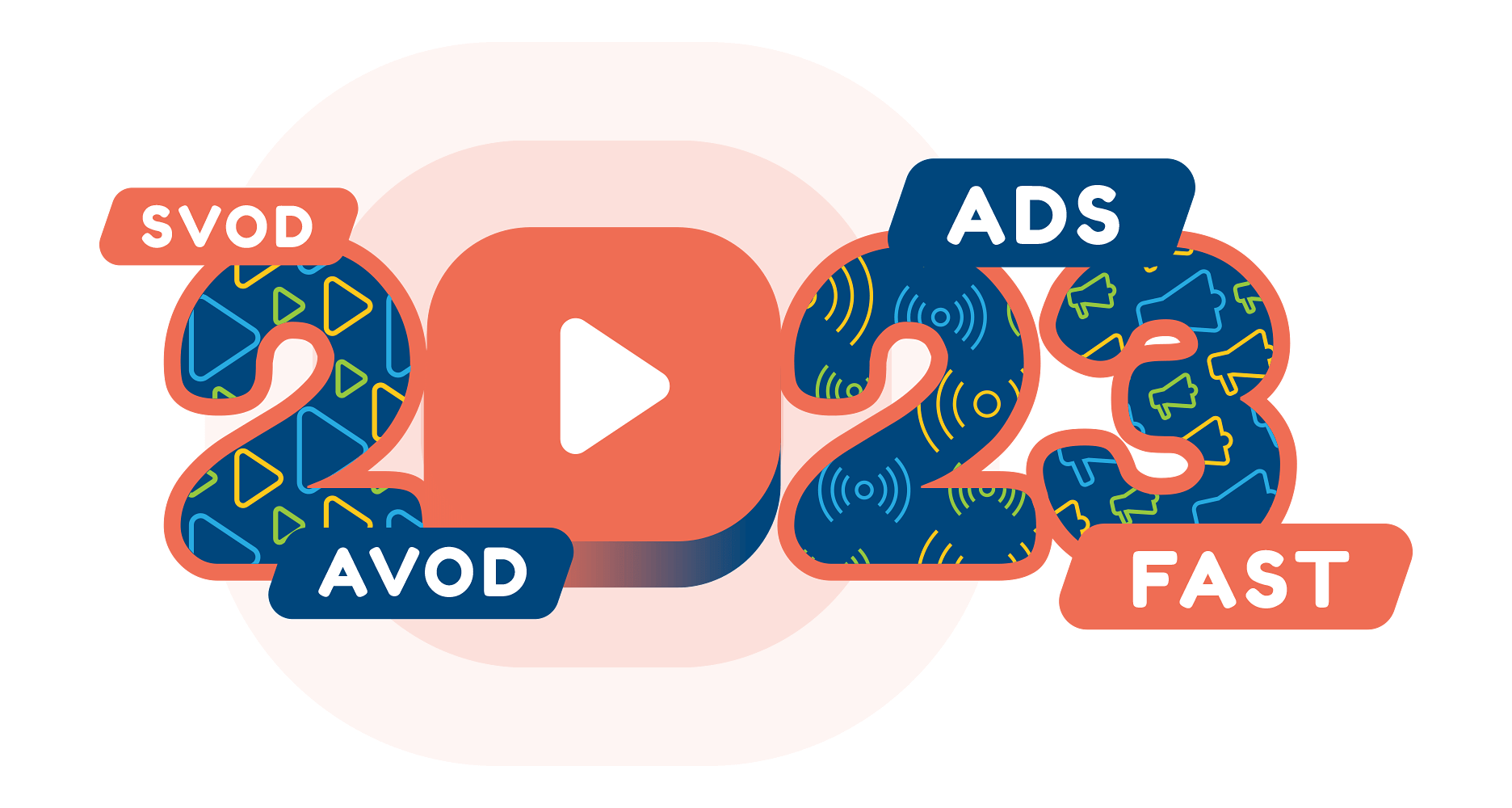 2023 Trends to Watch in OTT and Streaming Platforms

Is your video platform ready for 2023? Learn the hottest OTT trends for the new year in this article.

Before diving into the OTT trends to watch for in 2023, let’s take a look back at key developments in the industry during 2022.According to a recent Comscore report, both ad-supported streaming services (AVOD) and subscription-based services (SVOD) grew during the 2020-2022 period. While the number of households using AVOD grew 29%, the SVOD market experienced a 21% increase.

With a slowing economy and looming inflation, consumer spending decreased over 2022. Despite this, a record-high 23% of internet households used nine or more streaming services in Q1 2022, according to Parks Associates. Thanks to the aforementioned growth in ad-supported streaming services, the overall 2023 market outlook remains positive for the OTT industry.

During 2022, there was a rise in OTT platforms that worked on diversifying their content offering. Amazon Prime plans to double its investment in Prime Video India over the next five years and also unveiled an on-demand rental service offered in multiple languages. In addition, there are now more streaming services that focus on one specific niche of content. Some examples are Crypt TV, which focuses on horror, and Nebula, which distributes documentaries.

From content development and tech advances to consumer behaviors and market drivers, Axinom presents the top trends to watch in 2023. The following shifts will not only impact the market throughout the upcoming months but have also the potential of affecting the development of the OTT market in the years to come.

AVOD will invest in original titles, while SVOD will focus on creative partnerships

Streaming services are planning to invest more in original content, however, there is a differentiation between SVOD and AVOD spending Tubi, an ad-supported streaming service owned by Fox Corporation, announced they plan to expand its programming slate with original content after achieving a monthly user growth of 164%​. On the other hand, Netflix’s programming investments will be more moderate and rise at a slower rate. The company’s spending is expected to slow by about 14% between 2021 and 2025.

Companies like Netflix and Amazon Prime are beginning to partner with local production hubs to create content for new customers while also sustaining their current subscriber base interest. Not to be left behind, Disney+ recently announced a deal with Japanese manga publisher Kodansha to co-produce original anime series. Inflation will keep pressuring OTT services throughout 2023

Big players, such as YouTube and Roku, have experienced a decline in ad revenue in the second half of 2022. That being said, the overall OTT advertising market is expected to grow 12.8% during 2023 according to forecasts from Borrell Associates. In addition, a recent survey reported that 47% of US adults planned to gift a subscription to a streaming TV service during the 2022 holiday season.

Companies will also look for other ways to compensate for the loss of revenue. Roku laid off 200 employees in the last quarter of 2022, while Netflix will start charging extra for accounts that are not within the same household. In addition, Disney+ expects to break even by 2024 through advertising, lower market spending, and prioritizing high-impact content​.

Ad-based services will start competing to lower their ad loads. Therefore, Ad-based players will strive to maximize every ad spot through targeting to avoid increasing the ad load. Meanwhile, ​OTT providers will focus on developing new ad formats, such as the increasingly popular digital product placement. Vizio recently introduced jump ads, which are placed at the end of an episode on a linear stream and allow viewers to jump directly into an app to watch additional episodes.

The OTT market will see more interactive shoppable ads, such as the ones that take the user from the screen to checkout with a simple click. In addition, AI tech will be used to improve the placement of ads inside media content to avoid disrupting the viewing experience. Finally, Connected TV (CTV) devices will continue to be popular, as this technology is poised to reach 22.4% of households by the end of 2023.

The inflation crisis will drive consumer behavior at least in the first half of 2023, as 81% of US OTT users prefer to watch free AVOD platforms than pay for another streaming service​. Similarly, 83% of OTT users in France, Germany, Italy, Spain, and the UK would rather watch ads in exchange for free or reduced-cost subscriptions.

Current VOD services will try to diversify their revenue streams by branching out into multi-partner distribution and monetization. Some platforms will also distribute more valuable content–such as new releases and exclusive live events–using pay-per-view and other transactional approaches.

Ad-supported services will become the main driver of the streaming market over the next five years. Thus, streaming services will stop focusing on expansion, as users start embracing AVOD platforms and reduced-fee services with limited ads. A recent TiVo survey unveiled people use on average 10 different streaming apps – a trend fueled by the adoption of AVOD and FAST content.

The resurgence of ads is not limited to the American market. According to Deloitte, all major streaming services in Europe will launch an ad-funded tier by mid- 2023. In addition, before the end of 2024, 50% of these providers will also have launched a free FAST service.

To help OTT developers create their own FAST channels, Axinom Mosaic now can create unique channels out of media libraries. This was made possible with the release of three new Mosaic offerings: Axinom Channel Service. Axinom Cue Point Service and Axinom VOD-to-Live Service.

The hottest 2023 market opportunities are in niche markets

The convergence between sports live streaming and betting apps is closer than ever. 46% of American adults have expressed some interest in sports betting, with a potential market cap of $780 billion according to Nielsen. The biggest challenges for integrating betting services are streaming tech latency and regulations.

The Spanish-language market grew 11% over the last 12 months, so many services will start targeting Spanish-speaking households as YouTube TV has already done. 71% of Latinx viewers in the US watch Spanish-language programming, and Latinx households spend an average of $70.7 on streaming services.

In the MENA region cooperation with telco partners, development of connectivity, localization, and differentiation are expected to grow the market Turkey has seen significant growth in the SVOD market which is projected to reach 11.52 million subscribers by 2024.

In the Sub-Saharan Africa region, the growth is expected to be attributed to the improvement of connectivity, the development of payment methods, and the introduction of new SVOD offers. Nigeria and South Africa will remain the largest OTT markets in Sub-Saharan Africa accounting for over 50% of all OTT subscribers.

As you have seen, there are many reasons to start 2023 with optimism about the future of the video content industry. Our goal this year is to continue improving the Axinom Mosaic solution, so our clients can keep building content-first platforms that are scalable, modular, and ready to meet the challenges of 2023 and beyond.